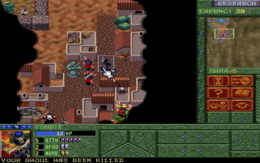 I recently acquired Blood and Magic, an old game from 1996. It is somewhat unique as a real time strategy; the resource gathering system is different from all other RTS’s known to me.

This game is a treat and is fun for throwing away a few hours. DOS Box plays the game quite well and it works with multiplayer too. If anyone wants to play a 1v1 (thats the only multiplayer mode supported), contact me.

With some difficulty, I have hunted down the 1.01 patch, the patch file is mirrored here.

The engine certainly does have its flaws. It is hard to select and control units. Pathing doesn’t work right. The graphics run at 320x200 with 8 bit color. 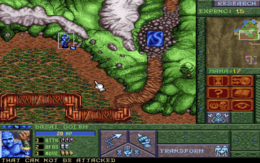 Some of the landscapes are quite nice. There are also lots of doodads all over the maps, which are somewhat unique. Overall, the graphics are amazingly vibrant with such limitations. However, the limitations are basically self inflicted since 640x480 displays were already common by the time this game was released.

This game would have been great if it had come out years earlier, by this time Warcraft II was already out which has superior graphics and engine capabilities and speed.

This game has two primary flaws. First, it is excruciatingly slow and has low framerate animations to make it feel slower. Second, it has a bold new and unique resource system which, unfortunately, is utterly retarded.

The resource system revolves around you creating units that sit down and turn into mana generators. Therein lies two problems. First, you have to manually click every mana generator to get the resouces out of them. Second, you slowly build up too many generators since there is no cap on the number you can have. A typical user experiences exponential growth of the mana generators. This leads to exponentially less time to do anything else (like actually play the game).

Another minor problem is that isn’t really much of a technology tree, its more of a tech list. Which constantly gets reset as you go through the campaigns. This is really quite annoying but is done to keep the single player campaigns somewhat fair.

The gameplay is most similar to Warcraft I. The slow pace and the ability to summon specific units makes the two games somewhat similiar.