Garmin used to be the greatest consumer handheld GPS device manufacturer. Early devices were very usable for the time, they had exceptional battery life and were extremely rugged. Most of that is still true, but somewhere along the way Garmin lost sight of usability.

Today, Garmin devices have a usability problem. One factor is the slow UI and dependence on physical buttons. But the bigger usability problem is self inflicted. Back in 2014, instead of improving their devices to allow users to load raster maps, they added a subscription model and map authentication to continuously extract money from users. 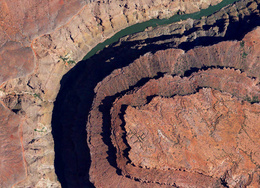 “Raster Maps” are maps drawn from images, opposed to “Vector Maps”, drawn from lines. Garmin devices are capable of rendering raster maps, but as previously mentioned, they intentionally block maps that are not ‘authenticated’. This limits the device to stop users from creating their own maps or using freely available aerial/satellite maps. Instead, they want you to subscribe to their terrible (and now defunct?) “BirdsEye” service.

Fortunately, there is a way to unlock the full functionality of your Garmin device. Unfortunately, it involves modifying your device’s firmware. The tools to unlock the firmware is Russian in origin as it seems demand for this sort of thing is especially high in Russia, parts of Europe, and Latin America.

I personally unlocked a Garmin Oregon 600 on firmware v5.50 and v5.60, however several models are unlockable, including eTrex, Colorado, Montana and others. For a mostly complete compatibility list, see Alex Whiter’s page

Please note that you are taking a slight risk in flashing modified firmware and you are probably voiding your warranty in some countries. 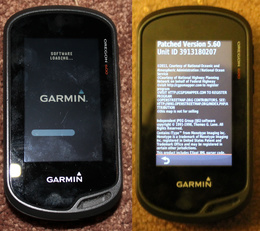 These steps will be shown from a Garmin Oregon 600 perspective, but it should work mostly the same on other devices. 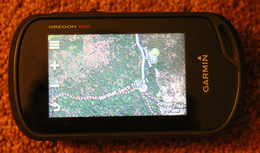 You can now load JNX maps onto your device by copying them into F:\Garmin\BirdsEye, where F:\ is your Garmin’s SD Card. While it is not strictly required to use a SD card for JNX maps, I do strongly recommend it. This is for two reasons:

I am personally using a Lexar Professional 1800X 64GB MicroSDXC UHS-II Card. I need this card for speed, because I’m constantly copying test maps to the card. However, most users can probably get away with something cheaper and slower. The maximum SD card read speed in Garmin devices appears to be quite slow anyway. Side note: I’ve read that 64GB is the largest size an Oregon 600 can use, but I have not personally tested anything larger. I’m interested to know if anyone has been able to get larger cards to work.

Also note that booting the device can take longer when there are a lot of JNX maps on it. Strangely, bootup times are also very random, sometimes bootup is instantaneous sometimes it can take 30-60 seconds. I assume it is something to do with sorting or indexing the maps.

Recovery is untested by me, but if something goes wrong, there are ways to enter the bootloader and flash a recovery image. See This GPS archive link.

I’ve been working on an application to make it somewhat easy for people to create their own JNX maps. It’s not quite ready for a release, but in the meantime, it is possible to use another Russian utility, SAS.Planet to create your own JNX maps. SAS.Planet actually works quite decently and despite it too being Russian in origin, it didn’t immediately virus my PC.