The Echoes are Deceptively Complex

Echo of the Wilds provides a very unique gameplay experience and at times a genuine feeling of magicalness. I thoughoughly enjoyed this game.

Like many of the games I’ve played recently, Echo of the Wilds is a pixel art game. Also, some of the ‘cut scenes’ have hints of ZX Spectrum graphics artifacts, indicated by repeating patterns of square regions. 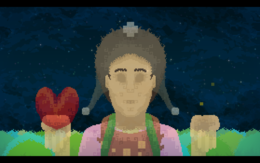 The raw pixel art is quite charming, featuring beautiful vistas and fun locations. However, many of the cut scenes have almost laughably bad graphics, perhaps due to emulating the appearance of the ZX Spectrum.

It is also worth noting that the background music and ambient background sounds are quite pleasant and relaxing. Very appropriate for when doing repeating tasks.

Occasionally a scene will pop up with ugly visuals and jarring scare stab sounds, which is actually done quite well and certainly had the desired effect of making me feel uneasy.

The art, with sporatic quality, is still a win in my book.

Entering the world of “Echo of the Wilds” leads you to believe it is merely a difficult survival game. And at first, that is exactly what it is. However, over time a bit of story is revealed and you will realize something more sinister is at play. This game evolves into a type of puzzle/survival genre that I have never experienced before.

Example zone, whats this area for?

The first time I attempted to play the game, it was riddled with bugs to the point of unplayability, but it piqued my interest enough for me to want to come back, which I did, years later. I’m happy to report that almost all the major bugs are fixed and the game is certainly playable now.

Surviving the Wilds is quite difficult and you might die your first time playing. The author patched the game and made it easier to survive, which drastically cut down on some of the tedium of collecting resources, which is much appreciated and makes the game more enjoyable.

One of the most fun parts of the game is realizing how to survive more and more efficiently, freeing up time to answer some of the mysterious questions that arise from the areas you visit. Eventually you become efficient enough that you can spend time working on the various puzzles in the game, which is probably best represented as a miniature version of Fez.

There isn’t so much a story as just several small mysteries. Why are we here? Who are these people I occasionally bump into? What is the point?

Unfortunately, these questions are basically not really answered in the end. There is, however, enough of an ending to be satisfied that you at least understand what’s going on and there is some finality to it.

As far as I know, this is the only game of its puzzle/survival genre, and it is put together quite well. It has no major flaws that ruin the experience… Echo of the Wilds is an experience worth having.