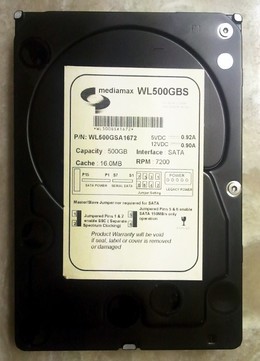 Years ago I went into cheapskate mode and bought a 500GB white label hard drive. Its model number was WL500GSA1672 or maybe WL500GBS, I’m not really sure. I’ve read that this was a debranded Western Digital, but theres no easy way to know for sure.

The drive was sitting in the primary router of the building, which also does various things like DNS, DHCP, VPN, etc. Suddenly, the entire system locked up. This failing drive managed to lock up the SATA controller and the entire system, even when it was in a mirrored raid. This, combined with horrible video hardware caused a network outage of a few hours.

The failure point appears to have been a head crash, when it spins I can hear grinding metal. The drive’s main fault was that it advertised support for S.M.A.R.T. but returned junk data when queried. While SMART is overrated, it is helpful with self-tests. Because there was no SMART, we had no way to tell if anything was actually starting to fail. Which it certainly was.

Was it worth it? Well, the drive cost $87.98 on Tue, Jan 2, 2007 and it crashed on Mon, Feb 27, 2012. I got 5 years of nearly continuous use from it. This is about the most I could expect, it’s demise was not unexpected but I did hope for maybe one more year out of it. I probably wont buy another white label drive, but I wouldn’t call you stupid if you did.

One last note that is somewhat funny. Normally we expect computer hardware prices to drop over time, but due to flooding in Thailand, a 500gb hard drive costs more now then it did over five years ago.