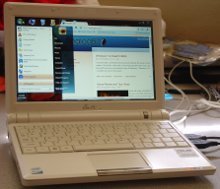 I must admit Windows 7 runs beautifully on my EeePC 900A netbook. Without doing any real performance benchmarks, I can at least say it feels much faster than linux. (The only other OS I’ve used on it.)

I started with a somewhat low powered netbook, the EeePC 900A linux edition. This EeePC came with a mere 4gb SSD disk drive and 1 gb ram. Microsoft gave me a promotional copy of Windows 7 Ultimate, so I figured I would get it to work on this EeePC and report how I got it to work.

Step One, Upgrade the BIOS

The first thing you will need to do is download the newest BIOS for your EeePC 900A. The shipped version has somewhat poor hardware support, so updating to the most recent version (BIOS 1103 at the time of writing) is a good idea. Format your USB flash memory stick with the FAT filesystem, and unzip the bios file to it. Rename the bios file to 900A.ROM. Plug the EeePC into a power outlet so that it is not on battery power. Plug the USB drive in, hold down Alt-F2 when you boot, this will open the automatic bios flash screen. Wait patiently for it to finish.

You will need at least 20gb disk space if you are planning to use Windows 7 Ultimate. Other versions, such as Home Premium and Professional reportedly use less disk space, but none use less than 6gb out of the box.

While it is reportedly possible to install a stripped down version of Windows 7 even on the 4gb SSD. I highly recommended that you buy a new SSD to replace the built in one. But if you are crazy enough to try it on the 4gb SSD, you will need to use vLite to strip nearly everything out before installation. I wont be covering that process as I upgraded my SSD.

I recommend the 32GB Super Talent FPM32GLSE SSD but there are several other choices out there. I also bought some memory (Crucial CT25664AC800 2GB 200-pin SODIMM DDR2 PC2-6400 Memory Module.) There is a dispute about memory performance and clock speeds, so if you are trying to max your performance you might try to read some forums about it. More memory is a good idea, but not as necessary as the SSD. As always, theres some guy on Youtube that will tell you how to install the new hardware.

If you bought a USB DVD drive, then just plug it in and do a normal windows installation.

I used this method. It is actually easier than it appears, but be careful with the drive letters.

You may notice cursor glitches and performance problems with your integrated video and Windows 7. DO NOT use Windows Update to upgrade your video drivers. If you do, your system will crash with the driver half installed.

Instead, get the latest drivers directly from intel. Next, reboot into safe mode, by holding F8 when you reboot. Install the intel drivers in safe mode.

Previously, an unofficial hacked driver was required. But recently an official driver was released that works on the 900A. It can be found here. This is neccessary if you want the Fn buttons and Super Hybrid Engine to work.

For those who don’t know what this does, it overclocks your netbook so that it runs even faster than stock speed when you have it plugged into a power outlet. It is made by and somewhat officially supported by Asus. I found the latest version here.

If you have a SSD in your netbook, you will want to disable windows defrag. Right click your C: drive, click on the tools tab and click ‘Defragment Now’. Then click the button that says ‘Configure Schedule’. Finally, uncheck the box that says ‘Run on a schedule’ and hit OK.

Another update: I’ve received a message noting that this works for the Asus Eeepc 901 as well.

“The method described works also for a 901.After installing the ACPI driver the EEEPC tray utility shows up. When you enable Bluetooth Win 7 will automatically install the drivers for Bluetooth. The wifi adapter is different from other models. It is very important to use the Ralink_RT2700E_v3.0.2.0_7a because the Win 7 Starter SP1 driver (3.0.0.4) does not work correctly. Because the onboard SSD (4Gb) is faster I moved virtual memory to this ssd.”

Due to the rest of the internet being as slow as molasses, and generally unstable, I have mirrored the files used in this article. If any of the vendors have a problem with this, please just let me know.