Q: How do I get free internet where I should have none?
A: Use tcp-over-dns tunnelling software.

We’ll show you how.

DNS stands for “Domain Name System”. The purpose of DNS is convert a domain name, such as “analogbit.com” to an ip address, such as “208.113.168.166”. The interesting thing about DNS queries is that they are usually recursive queries. This means that if a server doesn’t know the answer for a domain name, it is allowed to ask other servers for the answer. So while a firewall or restrictive ISP may filter regular internet traffic they probably overlooked DNS traffic. 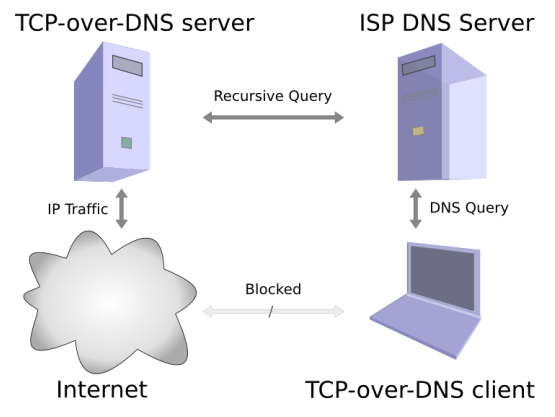 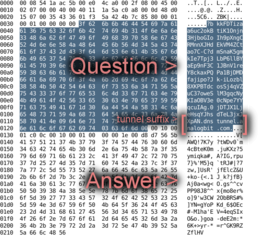 There are many things working against the efficiency of the tunnel. There are certain restrictions about what characters may be in a domain name (a-z, A-Z, 0-9, hyphen) so data is converted into the appropriate character set before transmission. The server’s answer to a query also has many restricted characters, so it too must do the same thing with a different set of characters. Every query that is answered by the DNS server must also include the question in the response. The combination of these restrictions means the total data transmitted is not very efficient compared to the number of bytes actually sent.

First you need to point the domain to the location of your server. If you want to squeeze out a few more bytes per query, try to keep the domain name as short as possible. Ultimately we need two DNS records. One that says that there is a name server for *.dnstunnel.domain.com. The next record says where you can find the ip address of the aforementioned nameserver.

If you have direct access to the the DNS record you can add something like this to the bottom of it:

Okay, maybe I’m a cheapskate, I don’t actually own a server where I can edit the DNS record directly. However I am in luck. Some of my users have brought http://freedns.afraid.org to my attention. You can use afraid.org with tcp-over-dns without even registering a domain name.
Set up any two subdomains so they look like the following:

Make sure you replace the A record with the ip address of your server. You can use various clients to update this A record automatically if you ip address changes. Read more about it on afraid.org’s webpage.

Many hosting companies let you edit your DNS record through a web interface.
Heres what it looked like when we were hosted on Dreamhost:

Download and extract the tcp-over-dns software to the server machine you are using.

Choose a port on the server you want the client to be able to access. Currently, there is no authentication, so keep security in mind. This works on any OS that runs java, and both TCP and UDP traffic is tunnelled through, so really any application you wish to use should work. Please note that you need to have a program running and listening on the –forward-port. You will connect to this program through the DNS tunnel.

Some of the best choices are:

As root/administrator, run the server:

The above line causes the server to begin listening on the DNS port for client machines that it will tunnel traffic to port 22.

Download and extract the tcp-over-dns software to the client machine you are using.

This starts the client and it begins listening on port 60022 for data to tunnel to the server’s port 22. With an interval of 100 milliseconds it sends 10 dns requests per second to the server (if you have access to a fast network you might want this as low as 5 or 10, but keep in mind it eats a lot of bandwidth in overhead).

On the client, attempt to connect to the server.

Or, if you want a proxy that you can use with web browsers or instant messengers:

Hopefully that worked. If not you can turn on higher levels of logging with the –log-level command line option, it may help. No data will be sent until a packet is received on the client end. There are some batch files and bash scripts included to make running the client/server a little easier.